We dance for the millions of individuals affected by cancer every year – not only the patients themselves, but their family and friends. All of the money raised by Wake ‘N Shake goes to the Brian Piccolo Cancer Research Fund. Brian Piccolo was a football player at Wake Forest. During his senior season in 1964, he led the nation in rushing and scoring. He then joined the Chicago Bears as a running back in 1965. Just a few years later, in the middle of the Bears’ 1969 season, Brian removed himself from a game after having difficulty breathing. After several tests, Brian was diagnosed with embryonal cell carcinoma. He passed away on June 16, 1970.

In 1980, students at Wake Forest University established the Brian Piccolo Cancer Research Fund in honor of our beloved alum. Wake ‘N Shake is one of several events held on campus every year benefiting the fund, which supports the Comprehensive Cancer Center at Wake Forest Baptist Medical Center (WFBMC). This center is one of the most advanced cancer treatment facilities, ranked 19th in the nation and 1st in North Carolina by U.S. News and World Report.

We started dancing for Brian, and we have continued dancing for all of the members of our community that have been impacted by cancer since then. Every year, the highlight of our closing ceremony is a speech by a current Wake Forest student who has been personally impacted by cancer. These emotional speeches always remind us how much of an impact cancer has already had on our own community. 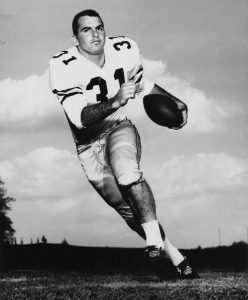